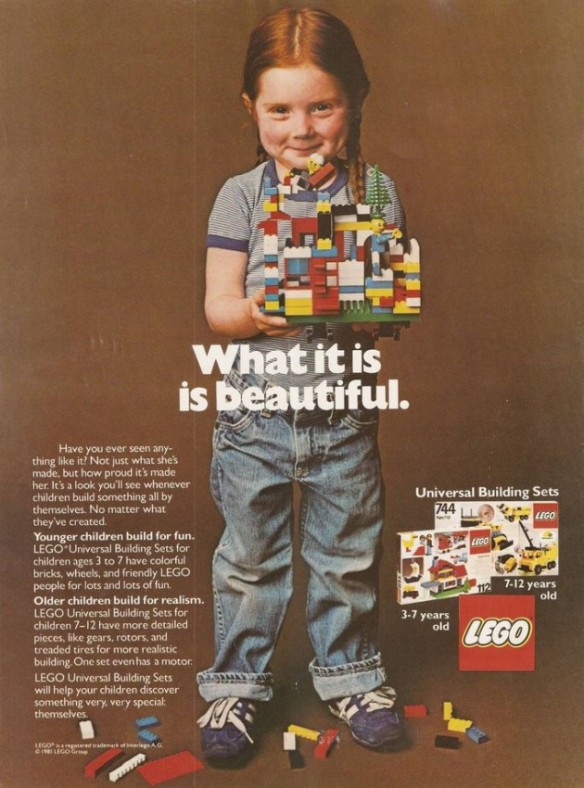 Earlier this year, an article appeared on the Huffington Post web site about the 1981 print ad for LEGO pictured above. The ad was made by a woman (as it happens) and as with all great ads from the time, the copy was as important as the image and read:

What it is is beautiful.
Have you ever seen anything like it? Not just what she’s made, but how proud it’s made her. It’s a look you’ll see whenever children build something all by themselves. No matter what they’ve created.
Younger children build for fun.

The little girl pictured is dressed as all kids were dressed in 1981 – in clothes that are comfortable, allow movement, are easy to care for, allow her to express her own individuality and that probably were passed down from an older child. Sound familiar?

The photo and the article must have struck a chord as they quickly made the rounds on social media and became one of the Huffington Post’s most shared articles to date. The article also included several other brands whose iconic toys from that era have been re-made to look more girly. I’m not sure ‘girly’ is the right word. They look entirely less realistic – they all look exactly like Barbie to me.

Yesterday, an article appeared on the web site Women You Should Know written by Lori Day. Day is an educational psychologist, consultant, and parenting coach and also co-founder of the Brave Girls Alliance, a global think tank and consulting group of girl empowerment experts who advocate for healthier media and products for girls.*

The article follows her interview with Rachel Giordano – the little girl from the LEGO ad, now grown up and a practicing naturopathic doctor in Seattle, WA. 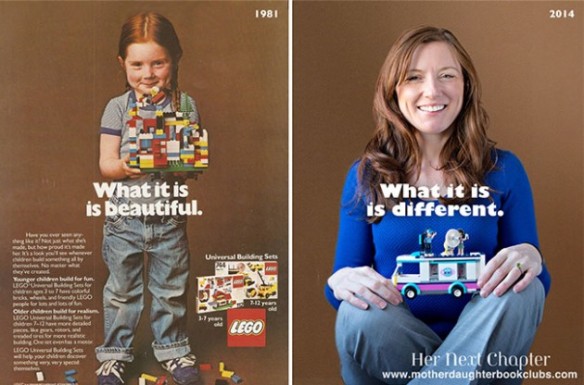 Giordano agreed to the then and now photo above and talked to Day about her experience on the photo shoot, saying that the clothes were her own and that she was given a LEGO set and left alone for an hour. What is shown in the advert is her own creation. She was startled when Day showed her the new LEGO Friends line, created specifically for girls, saying: “In 1981, LEGOs were ‘Universal Building Sets’ and that’s exactly what they were…for boys and girls. Toys are supposed to foster creativity. But nowadays, it seems that a lot more toys already have messages built into them before a child even opens the pink or blue package. In 1981, LEGOs were simple and gender-neutral, and the creativity of the child produced the message. In 2014, it’s the reverse: the toy delivers a message to the child, and this message is weirdly about gender.”

Can the trajectory from playing with non-gender specific LEGO as a girl to becoming a business woman and doctor be traced scientifically? Probably not, but common sense tells me there is a definite co-relation. Girls just need to be given opportunities to solve problems and be creative without the end result being dictated to them.

There is nothing wrong with pink. Little girls are often drawn to the pinkest, fluffiest, glitteriest things. But so are little boys. Boys are just encouraged to move on from pink as it’s deemed ‘girly’. In Lori Day’s article, she lets Rachel Giordano address the pinkening of toys: “Gender segmenting toys interferes with a child’s own creative expression. I know that how I played as a girl shaped who I am today. It contributed to me becoming a physician and inspired me to want to help others achieve health and wellness. I co-own two medical centers in Seattle. Doctor kits used to be for all children, but now they are on the boys’ aisle. I simply believe that they should be marketed to all children again, and the same with LEGOs and other toys.”

We all want our girls to grow up to be independent, self-aware, fulfilled, creative, interested and happy people. Let’s be aware of the messages that they are receiving and work to help them better decode them. Start by showing them how cool Rachel Giordano looks with her very own LEGO construction.

*Lori Day’s upcoming book is out May 1st is about Mother-Daughter book clubs and how they can be a powerful tool in helping increase self-confidence and raising stronger, healthier girls. You can find out more at her web site.